I just can’t wrap my mind around this: Using the word “disorder” to tell people that they have a mental illness that is
nothing to be ashamed of, it’s just like diabetes or any other physical
illness.
How can any
amount of anti-stigma campaigns neutralize the wrongness that this word
conveys?

: a confused or messy state
: a lack of order or organization

: a state or situation in
which there is a lot of noise, crime, violent behavior, etc.

medical : a physical or
mental condition that is not normal or healthy

2 :  breach of the peace or public order

3 :  an abnormal physical or mental condition

The mayor is concerned
that a rally could create public disorder.

problems of crime and
social disorder

Millions of people suffer
from some form of personality disorder.

“It was a rude awakening for me when I realised helping and care taking can be a subtle disguise for self-gratification.”
John Bradshaw
— Patrick McCurry (@patrickmccurry1) March 1, 2015

“My shame-based inner self could feel…okay when I was preaching and helping.”
John Bradshaw
— Patrick McCurry (@patrickmccurry1) March 1, 2015


In my frame, addictions are a natural defense against the isolation that comes with being shunned by our herd because of wounds caused by border
violations and other trauma. And that is an explanation, not an excuse – everyone owns responsibility for dealing with their addictions.

One common and very “normal”, even “positive” addiction
is help addiction … distancing oneself from harm to one’s own childhood vulnerability by helping
others. I was a help addict for many
years, and I now see this as a near relative of violence: Instead of “I am powerful, I am
not helpless”, I did “I am helping, I am not helpless”.

I also did the logic of nice:

And the judging of people I helped:


Link here in case you can’t see the clip:
Brené
Brown: Are You Judging Those Who Ask For Help?

Quoting from the video clip:

“How many of you are
comfortable asking for help?” Few hands go up.

“How many of you would
rather give help than ask for help?” Nearly all hands in the audience go up.

“When you cannot accept and
ask for help without self-judgment, then when you offer other people help, you
are always doing so with judgment.”

Help addiction is related to violence, and …

Shutdown, which can be lauded as “professional detachment”, can lead to harmful labeling and the humiliating mental help that a patient advocate called Jake describes here. Aggression often occurs without witnesses, and whingeing is an effective defense against criticism.

Linking to a blog post by Monica Cassini: Healer heal thyself (to the mental health professional)

Clinicians are trained to never, ever identify with the client. Why? What is wrong with recognizing shared humanity, even a weakness or flaw, and bonding in that? In providing a safe container from that understanding? The mere instruction to avoid such intimacy at all costs seems like a violent denial of oneself and clients both. It seems indicative of a deep fear of ones own dark parts. How do we help others find their way out of the dark if we hide from our own darkness? Such identification may not always be appropriate to share, no doubt, it may also not be present with many clients. But when it is present and appropriate to share from such a place, with adequate boundaries in place, it can be an incredibly healing experience for both parties.

And I recently came across a blog post by Clare Slaney, where she  writes bluntly and honestly about help addiction:

“If you want to be loved and liked, don’t go into psychotherapy.”
She links to an interview with Estela Welldon:
http://www.theguardian.com/society/2011/nov/17/estela-welldon-speak-mind-patients-psychotherapy

When we treat patients as poor souls in need of our expertise we distance ourselves from them and patronise them. As a matter of principle, we are all equals. And it’s dead true that therapy attracts do-gooders, people in massive need of care themselves who find satisfaction in exerting control over others. Therapists come into training because we’re interested in our own inner lives above and beyond almost everything else; we’re a desperately solipsistic lot and we’re all a bit bonkers. Therapists have to accept that about ourselves to keep the privileges that we’re given under control.

[Welldon] says she has an “enormous amount of violence myself, and I think the patients know that too.”

Hoorah. Many of us are seething with violence a lot of the time but we’ve learned to tone it down, disguise it, pretend it’s something else because that’s what gets rewarded and it’s why so much of Paganism is pathetic. Sitting with some friends the other day one said, ‘If one more person tells me I’m strong, I’ll scream.’ Another replied, ‘Tell them you’re not strong, you’re violent, that’ll shut them up,’ and we laughed with recognition and pleasure. Religions in particular tell us we must be meek and mild, totally accepting, utterly non-judgemental and it’s a very rare person who can come close to that even occasionally. Patients who are wild with fury, often very justifiably, don’t want to be met by someone who would really like them to talk about rainbows and puppies and the power of forgiveness. Whilst it’s often important for a woman patient to have a woman therapist there must also be room for a woman to meet with a male therapist who’s au fait with his responses to sex and gender and is comfortable with a woman who needs to rage or talk honestly about her dangerous feelings around her children. I’ve met too many women therapists who make their fear and disapproval of women’s rage and violence all too obvious.

I don’t have a solution to this,  just a suggestion. Check how you communicate with people you help. If you are being helped, check how the helper communicates:

Here is the English study that these definitions come from:

Mentalization
involves being aware of and absorbing and understanding mental conditions in
oneself and others. Many mental processes are involved – not only thoughts and
emotions, but also needs, wishes and fantasies. In all social interactions, for
example in the relation between patient and doctor, the ability to perceive and
interpret the intentions, impressions and emotions of oneself and others is
central.

This definition is by Bengt Mattsson, professor
emeritus at the unit for general medicine, University of Gothenburg, from his
article “Om läkares olika fallenhet att relatera till patienter”. The title can be roughly translated as “On doctors’ different ways of relating to patients”.
The study he describes found four different ways of
relating to patients, many of whom had mental problems:
Mentalizing: Emotionally engaged, welcoming attitude, accepting of differences, curious
and intent on understanding thoughts, emotions and impressions. Often able to
connect with the patients’ situation from a broad overview.
Limited mentalization ability: Interested in the problem but could not always see a
connection with other life situations. Limited interest and curiosity, uneven
seriousness and respect for the patient.
Rejecting: Limited patience, could dismiss the patient’s perspective, did not
reflect much over their own role in the interaction. Might scoff at patients
with mental problems.
Biomedical: Focus on categorization, diagnostics, rating scales and medical
treatment. The doctors were neutral and did not wish to be involved in
psychological circumstances. The narratives of patients were considered
information to be fitted into a biomedical frame.

I’m posting a lot of links today, partly because they are links to interesting viewpoints and information, and partly because I’ll probably be quoting from them in later posts.

This one is from the blog of @DrDavidHealy, and it begins like this:

February 17, 2014 9 Comments
Editorial Note: Two weeks ago we ran Peter Gøtzsche’s Psychiatry Gone Astray. There was a context – a Danish  doctor had been found responsible for the suicide of a young man put on antidepressants. This and Peter’s article stirred up debate in Denmark drawing a hard to credit defensive response from senior Danish Psychiatrists.
Peter’s blog was critiqued by George Dawson on Real Psychiatry. An anonymous tweeter @psycrit said “a post about @DrDavidHealy‘s nuttiness turns into an amazing discussion, with unbelievably high-quality comments”. Apparently my nuttiness lies in having anything by Peter G on the site.
There should be new word for this kind of ad hominem attack – which also flavor’s Dr Dawson’s post. It’s ad hominem by association or ad parahominem.

Agendas and Anxieties: CBT for Psychosis

I have been watching discussion about the latest CBTp trial with interest and some weariness.

And here are some interesting links that I found in his feed:

Find The Gap: Or, why researchers squabble so much.

Posted on February 14, 2014by saraheknowles

The post and the comments section is interesting to a confused layperson like me, and somewhere in there Sarah Knowles writes what I have been thinking:

For me, one of the core values of the scientific method is the fact that you’re expected to change your mind based on the evidence, in which case the idea that scientists are just sticking to their guns regardless is very worrying.

2014 : WHAT SCIENTIFIC IDEA IS READY FOR RETIREMENT?

The Americanization of Mental Illness

Alex Trochut
By ETHAN WATTERS
Published: January 8, 2010
AMERICANS, particularly if they are of a certain leftward-leaning, college-educated type, worry about our country’s blunders into other cultures.

Guest post: What will help prevent tragedies like Mid Staffs happening again? Time for a shift in attention. 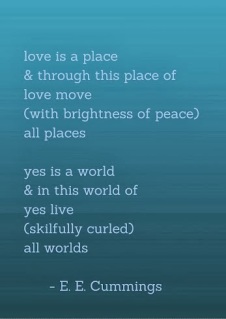 A friend used to phone once in a while and ask me
to «Please say the wonderful word”.

And I would say the wonderful word:

And we would both be silent for a moment,
basking in
the wonder of this word, this concept:

Where else is there to be?


Other than in the centre of
our world?

Maybe in a self-ish place, an invasive place, where they
displace others from their rightful spot in the centre of their own world.

They can also be in a self-less place … in constant
displacement from the centre of their own world.

Because … because it’s relatively easy to notice when someone is actively pushing.

As for people who aspire to self-lessness … they’re
like a mother-in-law someone described once: “She is so invisible
that I keep bumping into her all the time.”

I can set clear borders to protect against open invasions and self-ish behaviour. I have never really managed that when met with self-less-ness.

The Logic of Nice gets in the way and hears “You are a horrible person” when I say “Please to remove posterior from the breathing”. (Brownie points if you know where this quote comes from.)

But I’d rather be seen as Bad than have
someone’s posterior in my breathing.

I prefer to breathe freely.

My way to cope with complex trauma

A Transdisciplinary Philosophy of Medicine Network

"Working Conversations" and so much more! Thinking about the future of human communication.